Last update of the year, and looking back at 2016 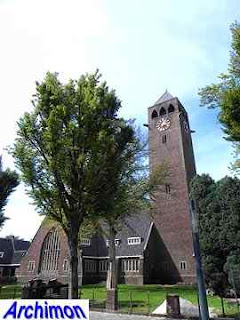 The last update of 2016 is another page about an architect, Jan Stuivinga. Another protestant architect who was active mostly in profane architecture, but with a few interesting churches none the less. Like the Lasonderkerk in Enschede as shown in the picture.

Now another year is ending, I'd like to look back at 2016. It was the first good year for this website since 2012, when private matters began to interfere with regular updates. 2013 began optimistically enough with one update in January, but the next update didn't come until May 2014, and that year saw only three more messages in this blog. It took me until November 2015 to find the time and energy to fully return, and I finished that year with five more messages posting updates on mainly older pages.

In 2016 there were a total of 31 messages announcing many more updates, including this one, and with multiple updates in every month except for August. In some cases, several updates were made to the same pages and it's no use mentioning them all again. But a few numbers I'd like to mention:

- There were 22 entirely new subject pages, 10 of which were about architects (including a few very important ones), 6 about a municipality (5 of them in the Utrecht province) and 4 about a specific church.

- 9 pages about municipalities were improved with new pictures and information.

- 4 pages about specific churches were given new and better pictures.

- 16 pages were translated, bringing the number of bilingual pages to 170.

And then there were many, many smaller but often important changes to older pages that I did not mention on this blog. Many more of these updates, but I'm sure also many bigger ones, will follow in 2017. See you next year!

Email ThisBlogThis!Share to TwitterShare to FacebookShare to Pinterest
Labels: Architects

The page about the city of Enschede, Overijssel province has been updated in such a way that it now covers almost every church of some architectural importance in the Enschede municipality. These include the churches of the villages of Boekelo and Glanerbrug, but also churches outside the city center. Fifteen objects were added, bringing the total number at twenty-seven.

Posted by Archimon at 20:04 No comments: